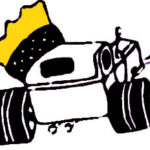 Once the name for the club was established, members created a logo and plaque for the club. The design included old English writing along with the clubs 1932 Ford Duece Coupe dawning a crown.

Each member had a club jacket that they wore with pride. The jacket was Royal Purple and had white fastening snaps and a “Beetles” style collar. It was a three-quarter length loose with a split part way up from the bottom of the jacket on each side. The car displayed on the back of the jacket was white with black wheels and a gold crown on the corner of the car body roof. The sleeve of the jacket, just below the shoulder, had cross checkered flags with the member’s first name shown under the flag’s. 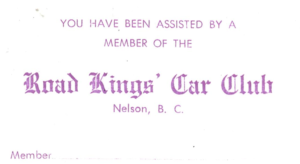 Road King’s meetings were originally held in the Nelson Civic Center’s “Green Room” where member’s planned social events and scrutinized each other’s cars. Members could receive a fine from the “Club Cop” if their car was not clean, they were observed “laying rubber” or a member missed an event. Club activities included: car washes, bottle drives and Rock and Roll dances at the Lakeside Park Tennis Court. The club was known to help out in the community by donating money raised to local charities such as the Fire Hall for local community support. Member’s also carried club courtesy cards that read “You have been assisted by_____________ , A Member of the Road Kings Car Club” which were handed out by a member if they assisted a motorist in distress.

Some gathering or socializing spots during any given week were the “Greyhound Bus” depot, that in the 1960’s was located on the corner of Baker and Hall Street. Another popular spot was the “Totem Burger” by Lakeside Park and the bridge approach. Hot Rods and Cruisers from the early 30’s to the 60’s drove up and down Baker Street. Member’s kept their cars looking cool and with the times by lowering the front of their cars and raising the rears. This was referred to as the “California Rake”. Some cars were lowered at the back or all the way around. A popular look of the 60’s was to have chrome reversed rims which would make the rim look deep in the center and outfitted with a plain chrome center hub cap known as the “Baby Moon.” Six-cylinder car exhaust manifolds were divided into two parts with an additional exhaust flange welded on to improve the car’s rumble. A car with a great rumble was an important thing in the day! As time passed, the original group began to raise families and moved onto other interest so the Road Kings dissolved as a formal group.

In January of 2003, a new group of Nelson and area residents felt Nelson would be a perfect setting to have a car show. A meeting was set up at the Hume Hotel where about 20 classic and muscle car enthusiasts showed up to form today’s Nelson Road Kings. In a matter of months, this group formed a committee that was able to put together the “Queen City Cruise” for September of 2003. Since this time the Nelson Road Kings have been able to put together a car show that hosts almost 400 cars and has about 10,000 visitors for its two day event.